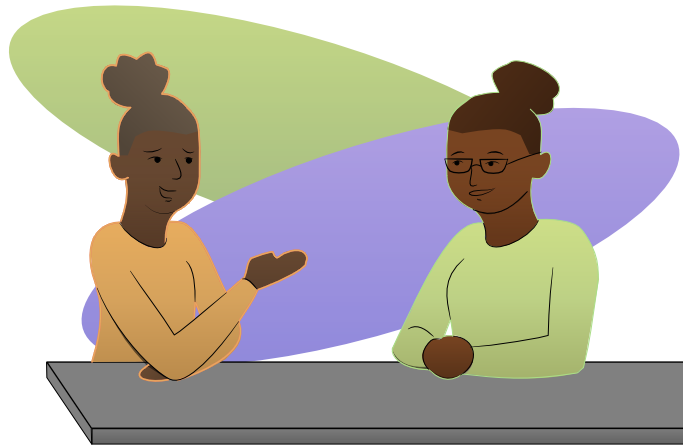 Auntie Clarissa is known as the wisest member of the Coconuts. Even when she was a little child, older kids in the neighborhood requested that she guide them in their decision-making processes. She earned nearly perfect scores on all of her tests, but she never bragged about her successes.

At nineteen, Auntie Clarissa graduated from Fruitland University. When she turned twenty-one, she earned her Master’s of Business Administration (MBA) from the same college. It’s her belief that everyone should have a mentor, and Carlton is hers. Since he seems rather reserved, few people approach him for advice. However, Auntie Clarissa knows how to skillfully get her older brother to zero in on her field of interest or concern. They don’t talk often because Carlton travels a great deal to promote his international business.

One afternoon, she just had to call her older brother after experiencing a bizarre event in the local grocery store. As she explained to Carlton, she had a rather challenging morning of business meetings and decided that taking off her heels and walking to the local grocery store would refresh her. Auntie Clarissa is quite petite, just five-feet tall.

She took several deep breaths as she walked to the market. Her list was short, so she didn’t expect to spend long there. In fact, she was truly glad that she had walked. She felt invigorated, but not for long. As she cruised down the cereal aisle, she picked up her favorite hot cereal, but then she saw her favorite cold cereal was dramatically on sale. Sadly, it was on the top shelf; there was no way that she could reach it.

Auntie Clarissa scanned the aisle for tall people. Not far away was a tall man who appeared to be texting. She politely walked over to him.

Before she could ask him to assist her, he growled a response. “No, I won’t give you any money!”

“ I wasn’t asking you for money.” He ignored the rest of her statement. What a nasty person! Auntie Clarissa was so tired from the day’s meetings that she had to control herself. Tears started to well up in her eyes.

“Excuse me, sir!” Auntie Clarissa addressed another man who was walking close to her shopping cart. He cordially reached the box of cereal and smiled when she explained how the other man had insulted her.

Thankfully, the walk home was uneventful. Auntie Clarissa knew that as soon as she put her groceries away she would call Carlton.

“I hope you can talk, Carlton!”

“Sis, what’s wrong? You never call me during the day.”

Clarissa detailed the nasty man’s attitude and how insulted she felt. They both agreed that her response to the offense was out-of-character for her. After about twenty minutes, they decided that offering a session entitled “How to Deal with Difficult People” would be a great introduction to her Seminar for Future Entrepreneurs.